July "Mentor of the Month" 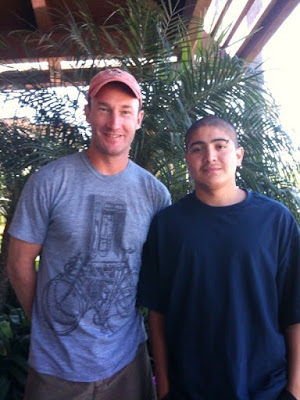 Steve mentors an 11th grader at Santa Barbara High School. When it comes to patience and humility, Steve has it. He has been meeting with his mentee for about 3 and a half years, working with him to see that he makes it through our school system. His mentee was referred to the program as a 13 year old who was in serious need of positive male influence. The adult males in his life were involved in violent behaviors, giving him the impression that he had only one way to prove to society that he was tough: to live a life of gang involvement. Even though Steve was aware of his mentee’s negative interactions with authority, girls in his class, and family members, Steve decided he wanted to help him out.


Over the years, Steve has proved to his mentee that he is not going to leave his side, nor is he going to give up on him. He has pushed him to try harder, to do better, to continue his education, and be a good older brother. Steve has traveled with him to court, helped his mentee stick to his contracts, take responsibility for his actions, keep up his grades, and maintain good behavior in and outside of school.
After his mentee was kicked out of school and sent to El Puente, Steve continued to work with him to overcome the obstacles standing in his way of being a good student, brother, son, and friend. They set goals together, and Steve taught him that in spite of his unfortunate circumstances, he could still do well in life. He told him that he didn’t need to be a part of a gang to become somebody in this world. Steve involved himself in his mentee’s life, furthering their relationship by becoming a part of his older brother’s life as well. He saw how important it was for the whole family to have one another as a support system when times were rough. If both brothers spent time together out of trouble, then it would be more likely that their younger brother would follow in healthier footsteps. The boys' mother has been tremendously grateful for all that Steve has done for her boys, and we are thankful as well.
With perseverance and heart, Steve has done his best to instill good ethics into his mentee. After good behavior and an improvement in grades at El Puente, Steve's mentee was allowed to enroll back at Santa Barbara High. He just completed his sophomore year at SBHS, showing a tremendous amount of growth and potential for doing even better in the coming years. Even more so, the mentee stated that he hopes to stay and graduate from there. He has become friends with a different crowd, is excelling in math, and is showing great potential in art.
Posted by The Fighting Back Mentor Program at 1:33 PM