What Do You Think?: House Parties 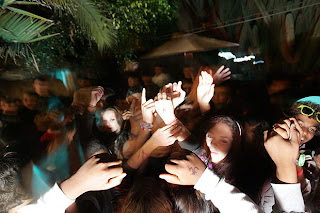 Eddie and Diego are walking home on Monday after school to play Xbox at Eddie’s house. As they enter, Eddie’s parents call him into the living room. They tell him they are going to be gone Friday night so he’s going to be home alone. Diego overhears that Eddie is going to have the house all to himself. As they play Modern Warfare, Diego tells Eddie that he should throw a small party. “We can invite Cindy and her friends. It’ll just be something small and chill; I know you think Cindy’s cute…this’ll be perfect!” says Diego. Eddie is hesitant but agrees to have something at his house while his parents are gone.

Friday night comes around and Eddie’s parents are headed out the door. They give him money for pizza and tell him only Diego is allowed to be over. It’s 9:00 pm and as Eddie changing in his room, he hears a knock. He tells Diego to let the girls in. By the time Eddie is done being ready, there’s about 20 people all over his house and more knocking at the door. This small party is turning out to be bigger than Eddie expected. He doesn’t even know half the people there.

1. What do you think is going to happen at the party?

2. What will Eddie’s parents think of him if they found out he had a party?

3. What would you do if your friend told you to throw a party? Would you of said yes? Why or why not?

** Movies, such as “Project X” and others, glorify large teen parties with minimal consequences, making it seem “cool” and inconsequential to throw large parties with underage drinking and other illegal activities.

** Four Loko, an Alcoholic Energy Drink, has been involved in many fatalities during young people’s partying, with both high school and college kids. Four Loko contains the caffeine equivalent of three cups of coffee, with 12% alcohol and a large amount of sugar. Some states have banned these and other alcoholic energy drinks because of their popularity in underage users.

** Alcohol is involved in nearly half of all teen automobile crashes and 50-65% of youth suicides. Sexual assault, damage to cognitive, physical and social development, injury, death, and future substance addiction are all risks that teenage drinking and partying can cause.

** Parents are often in denial or are not aware that their teenager is partying, drinking, or using drugs.

** Parents and other adults who provide alcohol, drugs, and/or party locations (especially in their homes) often feel they have control over the situation. Not only can they be punished for their actions, but the situations of house parties often escalate out of their control because they cannot monitor everyone at once. The same often applies for underage kids who provide to their peers and/or younger kids.

How Mentors Can Help:

** Kids may not want to open up about their partying, for fear of being punished. This is a conversation to ease into. You could start by bringing up the new movie, “Project X,” or another popular representation of teen partying. Ask them what they think would happen in real life and talk about how movies do not always accurately display the reality of what could happen.

** Allow this to segway into a discussion about some of the risks of teen parties, including: alcohol or drug overdose, injury, death, sexual assault or unprotected sex, drink spiking, gatecrashing, fighting, injury, and getting arrested.

** Ask your mentee if they know about some of the laws involving who is liable (them, the party host(s), and the owners/providers of the location) and discuss some of punishments, such as fines and jail time, that the responsible parties have received. Talk about how someone getting injured at or leaving a house party could also be the responsibility of those who hosted the party.

** Talking about any underage partying you might have undertaken is not necessarily appropriate because you are a role model, and they might want to imitate your behavior. However, if there are situations where you learned your lesson and never did it again, or someone you know experienced a serious consequence (jail time, fighting, injury, fines, death, etc), you could utilize your personal experience as a teaching lesson.

** Discussing peer pressure and ways that people can enjoy their social time with friends while still staying safe is important. Encourage them not to be talked into doing anything that makes them uncomfortable. Ask them their thoughts about hosting a party or providing alcohol to others, what they think the consequences might be. You might be surprised to know that they have a plan or are well prepared for those situations. Then you might not have to do the next point.

** Without lecturing, try to encourage things such as: never getting into a car after drinking or getting into a car with someone who has been drinking, leaving for somewhere safe when they feel they are in danger at a party, caution at parties around pools or other dangerous locations, knowledge about the risks of alcohol and drug usage, and if ever in a situation where alcohol or drugs are being used, do not let anyone give you something (because it might not actually be that substance, you do not fully know the effects, and/or someone could add date rape drugs to it).

** Encourage a plan for attending house parties, such as knowing how you are getting to and from (and having a back-up plan), who is attending, and what might be taking place, not going anywhere alone with strangers, and avoiding potentially violent situations.

** It is important not to encourage illegal substance use, but it is also realistic to make sure that those who are “going to do it anyway” to be safe when they do so. Encourage awareness of consequences, and helping to keep themselves and others safe. Feel free to share some statistics with them in order to make sure some of this is understood, as well as continuing to emphasize the difference between what is seen onscreen and what actually occurs in real life.