What Do You Think?: Marijuana Use 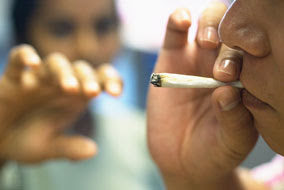 Roberto is in 7th grade and he is struggling. His family life has always been difficult with a mother working two jobs, a father in jail for drug related charges, and 4 other siblings to take all the attention. He is an average student, smart although not well motivated, but now in
Junior High the classes are harder and his mom doesn’t speak English so she can’t help him. He used to play soccer but his mom forgot to send in the paperwork on time so he didn’t make the team this year.
Roberto feels abandoned by his busy and overwhelmed mother and incarcerated father, and turns to his friends for everything and desperately wants to be accepted by them. So while he considered getting help on his homework in the after school tutoring program he quickly caved when his friends invited him to hang out at the park instead. As they walked to the park they talked about how hard and lame Junior High is, and how their parents are so unfair.
Once they reached a secluded spot one of them said “I know what we need to relax and take our minds off our problems” and brought a marijuana joint out of his backpack. While Roberto knew a few of his friends smoked weed they had never done it around him before and he didn’t know what to do, but he didn’t want to look stupid or for them to not like him.

Questions for Discussion:
1. What do you think Roberto should do? How could he say no so that his friends will respect him and his choice?
2. Why might smoking marijuana be attractive for Roberto? Would it make his problems better or worse (short and long term)?
3. How could smoking marijuana affect his future (school, health, relationships, family, work)?
4. What do you think would happen if Roberto and his friends were caught?
5. What could Roberto do to help relieve his stress and family problems without smoking marijuana?

**According to the California Law, possessing marijuana is a misdemeanor with punishments depending on location and amount. However, if the minor is selling drugs it is a felony punishable by significant time in juvenile hall.

**A minor in possession of less than one ounce of marijuana could be fined up to $100 and taken to a juvenile probation officer. If the minor has more than one ounce of marijuana in their possession the fine could be up to $500 and they could be sentenced to up to 6 months in jail (juvenile hall). 1st and 2nd time offenders can opt for a treatment program, such as through Teen Court, instead of regular court and probation. Their record is then wiped after successful completion of the program.

**If the minor has marijuana on school campus he could be expelled along with a fine and potential jail time.

**According to the Santa Barbara Healthy Kids Survey in 2011 6% of 7th graders have used marijuana in the last 30 days (4% on campus), and 33% believe that there is slight or no harm in smoking marijuana once or twice a week.

What Can Mentors Do to Help Prevent This?:

**Educate yourself about drugs so that you are prepared to discuss them with your mentee. These two sites are great resources: www.AbovetheInfluence.com, http://www.samhsa.gov

**Talk with your mentee about drugs and alcohol early and often. It’s always better to prepare them before they ever encounter it. Make sure they know the realities of its use (why people like it and use it, how many of their peers actually use etc), how it will effect them physically, mentally, and socially, and potential legal consequences. It is very important to be honest about drugs rather than use scare tactics, teens will not listen if you only talk about the negatives without acknowledging the attractive aspects.

**Ask them what they and their friends think about Marijuana, and don’t be overly critical of their answers, you want them to be open with you.

**Share your own experiences with drugs and peer pressure (within reason of course) and help them learn from your successes and mistakes. And most importantly, make sure they know you are always there for them and will not judge them for telling you the truth about what they or their friends do.

**Know the signs of use in your mentee:
• While under the influence: Rapid, loud talking and bursts of laughter in early stages of intoxication. Sleepy or dazed in the later stages. Forgetfulness in conversation. Inflammation (redness) in whites of eyes; pupils unlikely to be dilated. Odor similar to burnt rope on clothing or breath. Brown residue on fingers.
• Changes in friends
• Negative changes in schoolwork, missing school, or declining grades
• Increased secrecy about possessions or activities
• Use of incense, room deodorant, or perfume to hide smoke
• Subtle changes in conversations with friends, e.g. more secretive, using “coded” language
• Change in clothing choices: new fascination with clothes that highlight drug use
• Increase in borrowing money
• Evidence of drug paraphernalia such as pipes, rolling papers, etc.
• Bottles of eye drops, which may be used to mask bloodshot eyes or dilated pupils

** If you notice any of these signs and/or suspect your mentee is using don’t be afraid to confront them about it, although be calm and caring when you do. Tell him or her the truth — that you know or suspect he/she is using marijuana. Be patient and listen. Make your best effort to be non-judgmental about what the teen is telling you. Let him/her know that you wouldn’t bring up the topic if you didn’t care about him/her, and you are only interested in his/her health and safety.

**Tell them that you’ve read some materials on alcohol and drug use by teens and tell them what your expectations are for them, along with what happens if they violate the rules. Tell them that, while you’re no expert, you have access to experts in the community and that if they need help, you’ll be there.

** Talk with them about peer pressure. Ask if they have ever felt the need to do something they didn’t think was right because their friends asked them to. Try to problem solve with them and brainstorm ways that they can avoid the pressure next time.

**Encourage your mentee to participate in afterschool activities because they are shown to significantly reduce drug use. 3pm to 6pm is the most common time for teens to use drugs together because they are bored and unsupervised.

**For more tips see this PDF on how to deal with drug use and drinking when it’s not your child, http://www.theantidrug.com/pdfs/ei/AI_brochure.pdf
Posted by The Fighting Back Mentor Program at 8:00 AM

Labels: drugs, marijuana, What do you think?