What Do You Think?: Cell Phone Use in Class 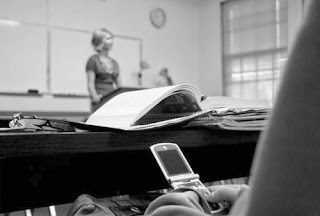 Ryan, a 7th grade student, is so excited because his grandpa just bought him a cell phone. His mom wasn’t very happy with it, and wanted him to leave it at home on school days, but Ryan convinced her it would be okay, that he’d only use it for “emergencies”.

The first few days, he kind of forgot that he even had it, and it stayed in his backpack until after school. But then one day during Nutrition, a bunch of his friends were showing each other a hilarious YouTube video. They told Ryan to check his phone, that they’d texted him the website and he should watch it. By the time he started watching the video, he had to get to his next class. He knew his teacher always started things slow, so he kept watching and finished when he arrived. But he didn’t have anyone to talk with about it when he got to class. He was bursting and really wanted to share his reactions with his friends, so he started a group text when the teacher wasn’t looking. He was nervous he’d get caught, but the teacher didn’t seem to notice. Pretty soon, class was over. He had no idea what the teacher had talked about, but his homework assignment was on the board, so he quickly jotted it down and moved on to his next class.

1. Do you have a cell phone? What do you use it for mostly?
2. Do you see a lot of friends texting during class?
3. Why do you think teachers don’t allow cell phone use in class?
4.  Would you consider it rude if you were Ryan’s teacher and discovered him texting during your class?
5. Do you think that Ryan should text his friends all the time now during class since his teacher didn’t catch him?
6. Do you think his mom might find out about his “non-emergency” cell use? What would she say if she did? What might be the consequences?
7. Why do you think or not think you and/or your friends should have your own cell? Give 5 good reasons to support your argument.

* 64% of teens with cell phones have texted in class; 25% have made or received a call during class time.

*Many teens feel pressured to have the newest and coolest phone.  With phone companies, such as Apple, coming out with newer models constantly, this can make kids feel as if what they have is not good enough.

*94-98% of teens note that the main reason for having their phone is so their parents can reach them any time and vice versa.  They also note feeling safer because of this.

*24% of teens have been bullied or harassed through text message and/or phone calls.

*There is a growing trend of using mobile devices to cheat on tests in school, which is also part of the reason many phones are banned, along with being a distraction.

*Cell phones can add to bullying, harassment, and inappropriate images/content.  Some teens may send provocative pictures to a boyfriend or girlfriend, later to find them posted online and/or sent to unintended recipients.  Teens have greater access to multiple applications on cell phones, especially on many of the newer models, as well as the internet, with little to no content restrictions placed.

*Talk to your mentee about whether or not they have a cell phone.  If they do have one, ask them how they got the phone (from parents, bought it themselves, etc) and why they like having it (to reach their parents, talk to friends, etc).  If they do not have a phone, see what they say about whether or not they want to get one, and why.  If anything regarding peer pressure comes up in this conversation, talk to them about being their own person and not worrying about what others think.  Use your own personal experiences if need be, perhaps talking about what the “cool trend” was when you were their age.

*Talk about ways to communicate with and without a cell phone, including contacting parents and friends, emergency calls, Facebook, land lines, e-mail, and others and how a cell phone can be used in positive ways.

*Work with your mentee to program an emergency contact number as “ICE” (in case of emergency) in their cell phone.  This would allow others to have a number to reach if an emergency arose.

*If you both have cell phones, it might be fun to go through different features together.  You could share ringtones together and talk about courtesy of ringtones, especially in class or other quiet areas.  Expand on this and go through games, texting, and other parts of the phone, making sure to continue the conversation about appropriate usage, courtesy, and privacy.  If you are familiar with them, talking about different applications and limiting privacy could also be helpful.

*Find a news story about cellular and cyber bullying.  See what their thoughts and feelings are about this.  Discuss bullying and encourage them not to bully others, through cell phones or any method.  Also encourage them to report any abusive, harassing, and inappropriate messages or calls they may receive.
*Talk with your mentee about how, once they put something out there, that person is capable of passing that information on.  This could be a text message, e-mail, photograph, Facebook post, or voicemail.  Encourage them to protect themselves by monitoring what they send to others and not to send something they would not want others to see.

*Discuss the ways that a cell phone can be harmful, such as distracting someone in class and/or while driving.  Encourage your mentee to use their phones in-between classes and never if they are driving.  Talk about some of the potential negative consequences, such as getting poor grades, getting detention from the teacher, or worse- getting into an accident and/or getting hurt if using the phone while driving.  If they have to drive a long way, encourage the use of a hands free headset or other hands free device and not to dial while driving.