What Do You Think?: Boys Projecting an Image 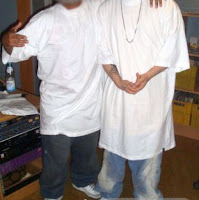 Scenario:
Javier just turned 12 and is going to junior high next year.  He wants to fit in with the older boys and start at his new school with a cool image.  His older brother who is in 11th grade always wears big white shirts over saggy jeans or long khaki shorts so that he looks kind of like a gangster, even though he is not affiliated with any gangs.  Javier doesn’t think about gangs he just wants to look older and get more respect like his brother so he decides to start dressing like him.  He also starts emulating his brother’s attitude of being too cool for school and not showing much emotion.  Ever since he started making these changes he finds himself getting in trouble more in school, and today his teacher sent him to the office for fighting even though the other kid was the one starting it and Javier didn’t do anything.

** Brains are wired for imitation.  Boys want to grow-up to be like their fathers, brothers, and other male role models in their lives.  Children have a natural tendency to emulate older children because they look up to them, therefore they want to be like them.

** Baggy shirts and saggy pants, a trend which began in the prisons, has increasingly become more mainstream in our culture.  Boys often feel they need to adopt this style of dress in-order to fit-in.  Music, media, and the internet are filled with images of this style of dress.  Popular artists, such as Lil’ Wayne and Eminem, gain a lot of attention for their style, making this also something that kids want to emulate.  Kids may not understand the origins of these images.  Those who begin dressing like this may also eventually want to repeat some of the actions of these individuals and my find themselves in trouble by doing so.

** Youth who are assumed to be affiliated with gangs or other negative groups are often treated differently, regardless of whether or not they are actually a member of that group.  This could lead them to become apathetic and/or could actually cause the very same behaviors the law enforcement, parents, teachers, or other authority figures are trying to prevent.

** Kids who go against the social norms in their neighborhoods and at school can often become the targets of other kids.  This can often make the kids feel as if they have to dress and act a certain way to avoid standing out in the crowd and getting picked on.

How Mentors Can Help:

** Talk with your mentee about how their appearance is often assumed to be an outward reflection of who they are and, if they are dressing a certain way, like a “gangster,” it might be assumed that they are affiliated with the people who normally dress and act this way.  Encourage them to dress to represent who they are and not who someone else is.

** Share with your mentee about times when you tried to dress or act a certain way to fit in and talk with them about how that affected the way others interacted with you.

** Talk with your mentee about their actions at school, at home, and in general.  Discuss positive versus negative actions and ways in which they can make positive decisions for themselves and with others.  Talk with them about staying away from fighting, drugs, and other dangerous scenarios and how, if they are part of one of these situations, even if they are not doing it, they could get into trouble by association just by being there.

** For kids who have siblings, talk with them about how they look up to their older siblings and/or how their younger siblings look up to them.  Use examples if you have older or younger siblings.  Talk about how they could be positive role models for younger kids, peers, and siblings (older or younger).  For those who have older siblings, talk about some of the positive things the siblings are doing (playing a sport, getting good grades, helping others, etc).  Discuss some of the actions of these older kids and what is and isn’t age appropriate for your mentee.

Resources:
News Article
NBC Today Show article
Posted by The Fighting Back Mentor Program at 6:00 AM

Labels: clothing, dress, friends, gangs, image, What do you think?

lol it is not "gangster style" baggy clothing was a trend back in the 90s-2000s. That is called hiphop style sweety... & those kids are making it look bad, look on now on days, people wear skinny tight jeans and be a delinquent in the eyes of many, your argument is invalid sweety...