What Do You Think?: Video Gaming 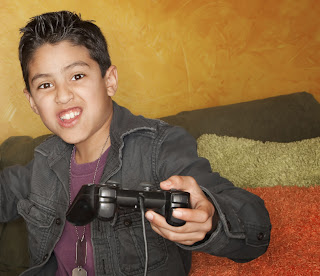 Scenario:
Carlo loves to play video games, and even though he is only 11 years old he just got Call of Duty 3 as a birthday gift from his uncle in November.  Ever since he has been obsessed with the game and plays it all day after school.  His parents don’t pay much attention to his gaming, or to him, because they both work so much and he has two younger siblings that occupy their free time.  They let him have the video game console in his room so that he wouldn’t bother them.
However, now they are becoming concerned because his grades are declining and his teachers complain that he doesn’t do his homework.  They tried to talk to him and enforce the rule of doing homework before playing, but this just causes him to lie about homework and stay up extra late playing so that he dozes through school.  Carlo knows his gaming is negatively affecting his life but he just can’t resist playing when he gets home.
The game is also far more mature and violent than is appropriate for his age, something that his uncle had no idea about, he just knew that Carlo wanted it.  Carlo has played first-person shooters before but this game is so much more realistic than his other games.  Today in school a kid pushed Carlo in the lunch line and Carlo instantly reacted with a much stronger shove that sent the kid to the ground.

** Video games are a highly effective learning tool for children because they engage attention, repeat actions, and offer rewards for success.  Research shows that this learning can be positive or negative depending mostly on the amount of time spent playing and the level of violence/mature content.

** Video games can be beneficial when they are played in moderation and the content is age appropriate.  The potential benefits of playing video games can include improvement in:
**However, when video games are played for more than 10 hours a week and/or are especially violent it can lead to a host of problems such as:
** According to a national study 92% of children ages 2-17 play video games.  And boys ages 8-13 play the most, averaging almost an hour a day.  This study also shows that African American and Hispanic youth play more videogames than white youth, and low income youth play more than high income youth.

** Another study shows that 89% of the most popular games contain violence, and half contain serious violence.

** Video game addiction is real and like any other addiction is used to escape from an unhappy reality and feel a sense of control.  Playing video games for hours every day to the point that it negatively affects other areas of their life means they are addicted and need help.

What Mentors Can Do To Help With This:

** Talk to your mentee about the video games they like to play and how much time they spend playing.  Ask them if they think it affects them in any way and discuss the pros and cons.

** Try playing a game with them to get an idea of the content so that you can talk about it with them and let them know how you feel about it.  Playing with them will also give them a chance to be better than you at something (probably) and will be a self-esteem boost if nothing else.

** Encourage your mentee to spend time doing other activities, or at least play games with more educational value and less violence (civilization vs call of duty).

** Take your mentee out in nature, to the beach or a nice hike, to help them clear their heads and get a fresh perspective on what is important in life

** If you notice your mentee is more aggressive after playing video games talk to them about it, they might not even realize it is affecting them.

** But most importantly, while you are talking about video games try to see it from their perspective and understand the appeal of video games, otherwise they will write off your advice.

To learn more about the good, bad, and ugly of video gaming try these sites:

The Good and Bad about video games article

Video Game Addiction Help
Posted by The Fighting Back Mentor Program at 6:00 AM