What Do You Think?: Girls Wanting to Look Older 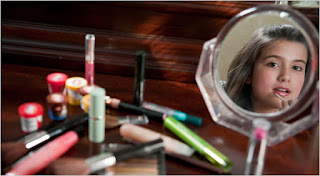 Alicia is 13 and in 7th grade. She wants to start wearing make-up because she thinks it will get her more attention from her older brother’s friends, who are all in high school. She thinks the boys her age are stupid, but is interested in dating. She wants her brother’s friends to stop thinking of her as a little girl, so she thinks if she starts wearing eyeliner, mascara, and foundation that she’ll start looking like a high school student.

Her big chance will be at a party on Friday night. Now with Facebook, if Alicia goes to that party, she knows that pictures will be posted that night, and wants to look good for the camera. She decides that will be her debut. Alicia convinces a few friends that they should all go buy make-up and new outfits for Friday, so they head out to State Street with a picture of their idol, Selena Gomez,from her new music video, and buy things to imitate her…big hoops, dark eye shadow and liner, and a short dress. Since Alicia hasn’t fully matured yet, she decides she also needs a push-up bra.

1. Have you worn make-up before? What have you worn, and when? Do your friends? What age do you think is too young to wear make-up?
2. Have you ever thought about “looking older”? What does that mean to you?
3. Why would you want to look older? What do you think you might accomplish through this?
4. Did you know that most TV shows that portray junior high and high school students have actors/actresses that are actually much older? (Selena Gomez is 20, the cast of Glee are between 20 & 28, Degrassi is set in Junior High, and they’re all 15-21).
5. What possible positive and negative consequences could come out of looking older than your age?  What kind of guy might that attract?

** Television and Hollywood put pressure on teenagers to look much older than they really are.
o   The average age of the characters in the show “Glee” is 25 and two of the actors who play teenagers in the show “90210” are over the age of 30.
o   Starlets under the age of 18, such as Taylor Momsen, are not only using make-up, but are wearing a heavy amount of it, along with clothing that might even be deemed inappropriate for adults, such as thigh-high boots.
o   With “The Kardashians,” “Jersey Shore,” and similar shows being part of popular culture, teenagers are seeing made-up, provocatively dressed, party-goers being labeled as “reality” television.

** Cosmetic and fashion brands continue to target teenagers, such as Neutrogena’s “Teen” line, scantily clad teenagers on the runway, and make-ups with names that sound like candy.

** Many pictures of models and celebrities use airbrushing and other techniques to give a false idea of what “beauty” actually is, making many young women feel as if they need to reach an unattainable standard of beauty.

** Current research is being done by the National Institutes of Health on the link between ingredients in make-up and earlier onset of puberty, with small connections already being made between the two.

** Teens with skin concerns may use make-up to feel more self-confident.  Too much make-up or using products with certain harmful ingredients could end-up worsening their skin, as many cosmetics contain ingredients that clog pores.

** Teenage girls who try to dress and act older than they are may be expected to act the ages they are trying to portray, especially by older men they might encounter, which could potentially put them in dangerous situations.  Teenagers have less of an ability to think ahead to the consequences of their actions and are often more focused on fitting in.

What Can Mentors Do?

** Encourage your mentee to check the ingredients in the make-up so they do not end-up doing damage to their skin or bodies.

** Talk with them about if they have considered how trying to look older might appear to others and if they have thought about what types of situations this could potentially put them in.

** Share your own experience with makeup and the positive and negative consequences you encountered when you first started wearing it.

** Ask your mentee, if they hang out with an older boy, could there be differences in what she and him are expecting from the situation because of how she is presenting herself with makeup.

** Talk with your mentee about what characteristics of themselves they feel positive about, making sure they find at least one thing that has nothing to do with make-up or clothing.

** Talk with them about how their behavior, actions, and how they treat others show their inner beauty on the outside just as much as make-up.